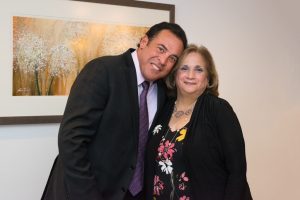 Gregory Cajuste is a businessman, a family man, and a true community man. He is a born and raised New Yorker with grit, passion, and resilience running through his veins. After graduating from high school, he enrolled in the U.S. Marine Corp where he finished top of his class and served our country. Thereafter, with his savvy business sense and out of the box thinking he became a self-made entrepreneur. He has successfully built up and sold several establishments which include a dry cleaning business, a real estate company, and a sportswear line but it doesn’t stop there. In fact, there is nothing he is afraid to tackle. One of his biggest accomplishments is going from being a livery driver to building up and owning his own successful limousine company with a fleet of over 200 cars. He then went on to take over Lucky Bar 13 and made it into one of the most popular bars on Long Island. His latest venture is opening up G’s nightclub in West Hempstead. Gregg’s vision of G’s is to have an exciting new club that brings the feel of a New York City nightclub right into our own backyard. Gregg is the Host of the Long Island Breakfast Club Show hosted at G’s NightClub in West Hempstead, NY.

Gregg passionately dedicates most of his time to helping others. As a founder of a non-profit organization on Long Island, Greg continues to fulfill his passion of helping others. During his time with the Kiwanis Club of Franklin Square, his involvement in Kiwanis International continued to help improve the quality of life for children around the world. Gregg went from being a member to vice president and just completed his term as president of his club. He has gone above and beyond with the help and support of his members to give back to those in need. He organized a successful fundraiser concert for Breast Cancer with proceeds benefitting Adelphi’s Breast Cancer Program. He didn’t stop there, he went on to organize another fundraiser concert this time for the Kiwanis Pediatric Lyme Foundation which was another success and helped several families with medical costs. Education is also very important to Gregg, so he has created several scholarships to help local high school seniors with rising college costs. In his own words “Family, friends and giving back to his community is what matters most to him”.  Gregg has become a mentor for individuals at the Long Island  Breakfast Club and is the Co-Host on the Long Island Breakfast Club Show with Tina Valentina founder of Club and Show.  He was named Long Island Hero at the annual fight for ovarian cancer event held in 2006 in memory of Joann Fiorentino Lucas.

Previously she spent two years at the County of Nassau Housing Unit developing the Employment Assistance Resource Network. She also worked as a marketing professional in the financial industry. Valentina’s spent over ten years at CMP Media as an Administrative Operations Manager.  It was during her tenure that her aspirations to be an author began, working along such a skilled editorial team.  Prior to CMP, Valentina worked in corporate management at Compaq Computer-Hewlett Packard. Her career spans over decades starting with Vernitron Corporation, as a representative for investor relations.

Ms. Janek is frequently called upon with regard to her community outreach experience on Long Island.  Janek was a featured guest most recently on Fox Five News, on The Anderson Cooper Show on CNN Series, CBS News, Channel 12 News, the God Squad, Jobline, Cablevision’s Our Town Series, Hometown and several local radio stations discussing the current turbulent times for professionals during their careers.  Valentina is sought out as a facilitator and inspirational speaker at schools, universities, community organizations, and professional businesses.