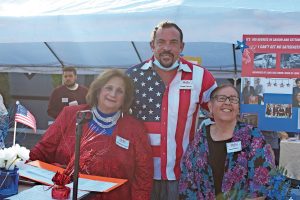 As the Vietnam War dragged on in the fall of 1974, Lana and Byron Noone were fighting a battle of their own at home in Garden City South, struggling to deal with two miscarriages and having given up on conceiving a child of their own.

Distraught, they couple talked to their pastor, the Rev. Dan Fritz, of the Christ First Presbyterian Church in Hempstead, and he suggested that they visit an adoption agency in New York City. There the Noones were told that they would have to wait two years for an American child, or they could adopt a Vietnamese child who had been orphaned by the war.

They chose the second option, figuring these children had nowhere else to go.

The story of their adoption efforts, part of a international rescue program dubbed Operation Babylift, became the subject of a book written by Lana Noone, now 73 and still living in Garden City South, and a play she co-wrote, after the Noones’ adopted daughter, Jennifer, graduated from H. Frank Carey High School in Franklin Square. The play, “Children of the April Rain,” was read by actors last Sunday at G’s Club in West Hempstead.