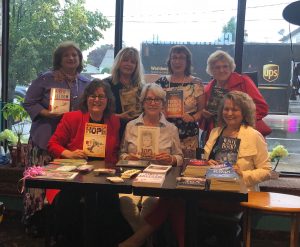 The Long Island Breakfast Club, in collaboration with the Long Island Way, has started a new club to help middle-aged people share their stories. Last month, they formed the Long Island Writers’ Club, in which leaders from the organizations will offer tips on how to write stories and get them published.

“As someone whose experienced job loss, I know how difficult it can be to put yourself out there,” said West Hempstead native Valentina Janek, one of the club’s founders and its president. “If I could do it, nothing should stop the members of our club from sharing their stories with others.”

Janek published her second book, “From Fired to Freedom — How Life After the Big Bad Boot Gave Me Wings,” in January. It is a compilation of stories about middle-aged people who struggled after losing their jobs, and how they moved forward from those experiences. “A lot of people who read my book told me that it made them feel like they’re not alone,” Janek said.

Keeping families and middle-aged workers on Long Island is one of several goals for the club, which has roughly 50 members, including residents of Nassau and Suffolk counties. The Breakfast Club provides employment and career counseling, workshops, interviewing classes and referrals, among other assistance, to help those seeking employment after losing jobs in middle age. The club also hosts meetings each month, which include sessions at which attendees can discuss job interviews and listen to motivational speeches. Janek said that her book publisher, Stephanie Larkin, came up with the idea of the Writers’ Club. Larkin said that for many middle-aged people, having a book published is high on their bucket list.

“It’s such an innate desire that people have to write. It’s self-affirming,” Larkin said. “However, when there’s a group, there’s a lot more accountability, people are encouraging one another, and once they start to get the ball rolling, they don’t want to stop.”

“Creating the Writers Club has been beneficial to all of us,” Long Island Way founder Donna Cariello said in a statement. “Our team approach fosters the creative process utilizing interactive conversation. We give our community the opportunity to tell their story from concept through publication.”

West Hempstead resident Chris Fidis, co-founder of the Breakfast Club, said that the Writers’ Club goes along with the group’s goal to make the most out of their challenges. “The fact that Tina launched her book, people are showing interest in getting their message and thoughts on paper,” Fidis said. “Writing gives them a chance to pull back, take a deep breath, and share that, which is heartfelt. Who knows? The next Tom Clancy can come right out of West Hempstead.”

The group will hold their next Writers’ Club meeting at the Valley Coffee Shop in Franklin Square on July 24 at 6 p.m. There is a $25 fee. For more information, email Janek at vjanek@optonline.net.