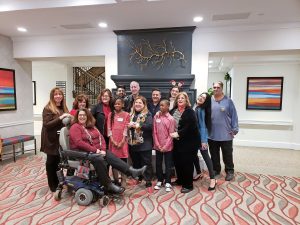 Roughly 40 residents attended the Long Island Breakfast Club’s meeting last month at the Bristal Assisted Living in Garden City. The club was able to book former Snapple spokeswoman Wendy Kaufman, once known as the Snapple Lady. Kaufman got to share stories about her life and career and how she dealt with job loss.

Kaufman, who grew up in North Woodmere and graduated from Lawrence High School in 1976, began her career at Snapple in 1991, where she worked in the company’s order department. She started answering fan mail in her free time, and in 1991, executives noticed her enthusiasm for answering the letters. The company decided to build a national campaign around her, and she became the Snapple Lady. Through her experiences and collaborations with people over the years like West Hempstead resident Valentina Janek, one of the founders of the Breakfast Club, is to be kind and courteous to all people.

“One of the best things you can do is be nice to everyone we meet, because you just never know who you’ll run into,” Kaufman said to the crowd.

In 2014, Kaufman teamed up with her husband, Steve, when he started a patio furniture business in Massachusetts. Now she is writing a memoir, “From Coke to Snapple: My Life in Ounces,” in which she discusses overcoming a cocaine problem and her time at Snapple. She is also working on a film project. She said she hopes that her memoir will guide people dealing with job loss, addictions and life’s challenges.