What comes to mind when you think about a giant? How about a mythical being of human form, that is extremely tall, big and mean! Pretty scary right? In today’s society, we still use the word “giant” (in a non-scary manner), when [sometimes] referring to someone of a larger stature… like BOLD’s “Man of the Month” Gregory Cajuste. 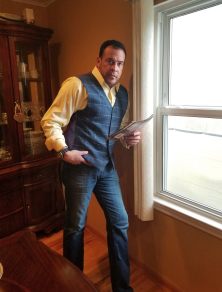 After graduating high school, Gregg enrolled in the U.S. Marine Corp, where he served & protected our country. After his time in the Marines, he came home and became an entrepreneur. With savvy business sense and that “out of the box” thinking, Gregg loved taking something from nothing and building it up. He successfully built and sold several businesses which included; a dry-cleaners, construction company, and a sportswear line. One of his biggest business accomplishments was going from a livery driver to building up and owning a successful limousine company, with a fleet of 200 cars. He then went on to taking over Lucky Bar 13 and making it into one of the most popular bars on Long Island. His newest venture, is the opening of G’s night club in West Hempstead, NY, where he brings the feel of a NYC nightclub to Long Island. Gregg isn’t just a businessman, he’s a family man and all about the community. He passionately dedicates a lot of his time to helping others. He became a member of several organizations, like The Knights of Columbus; a fraternal organization dedicated to promoting and conducting educational, charitable, religious & social welfare works, rendering mutual aid and assistance to sick and needy members and their families. Greg was an active member of the Kiwanis Club of Franklin Square (where he eventually became the Vice President and then the President). Kiwanis helps kids around the world. Their local clubs look out for their communities and the international organization takes on large-scale challenges, such as fighting disease and poverty. They are passionate about making a difference, while have fun along the way. For more than a century, Kiwanis has created opportunities for children to be curious, safe and healthy regardless of the community in which they live. They believe, when you give a child the chance to learn, experience, dream, grow, succeed and thrive, great things can happen. Their mission is BOLD MAGAZINE dedicated to improving the world one child and one community at a time. 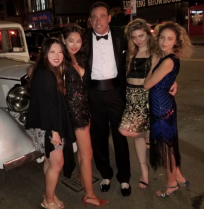 And that is just the tip of the iceberg for our BOLD Man of the Month! Gregg believes that helping others should be a celebratory event, and so he put together a couple of different fundraising concerts. For one of the concerts, the proceeds went to Adelphi’s Breast Cancer Program and the other concert was for the Kiwanis Pediatric Lyme Foundation, which helped cover many family’s medical costs! He’s also volunteered with helping our Vets and feeding the homeless. Gregg is also, big on education and believes all children should be able to receive a good one. We all know how expensive college can be, so Greg created several scholarships to help seniors from local high schools be able to afford college. Currently, Gregg sits on the advisory board and is a mentor for members of the Long Island Breakfast Club. The Long Island Breakfast Club, provides career counseling, support, and advocacy for experienced, in-transition professionals, referrals, companionship, business networking, contacts for interviewing and mentors to all Long Islanders in order to help them succeed. The club has a saying: “We Meet, We Eat, We Seek” … a “socialpreneurship” they call it. The LIBC provides opportunities for local business owners, representatives of local businesses, men & women seeking jobs/careers and business marketing events for owners of Long Island companies by meeting together over a delicious meal and networking!

Gregg is currently the co-host of “The Long Island Breakfast Club Show hosted by Tina Valentina on GovsRadio.com, every Tuesday & Thursday from 9:30am – 10:30am, where they bring guests on to talk about their business, jobs, resources (like share information that could be useful to others), hobbies, if they’re having a grand opening for a restaurants, theater, bar/club, if they have a particular talent like acting, singing, dancing, comedy… whatever it may be, they introduce them to the listeners/viewers of Long Island!

As stated by Gregg, “Family, friends, and giving back is what matters most to me!” and his actions definitely speak louder than his words! What can be given to a man such as Gregg… maybe more volunteer work! (Haha) Just kidding, he’s never requesting anything for what he has done for others.

So, what can we expect next from Gregg? Well, we don’t want to let the cat out of the bag… but he’s putting together an amazing foundation that’s geared towards helping men, women & children not only fight depression, but help those around them understand it. We are excited, and look forward to seeing more great things from Gregory Cajuste!

Fee-Fi-Fo-Fum! Take a moment and smile at someone! Fee-fi-fo-fum! Join Gregg in spreading cheer by giving hugs to EVERYONE